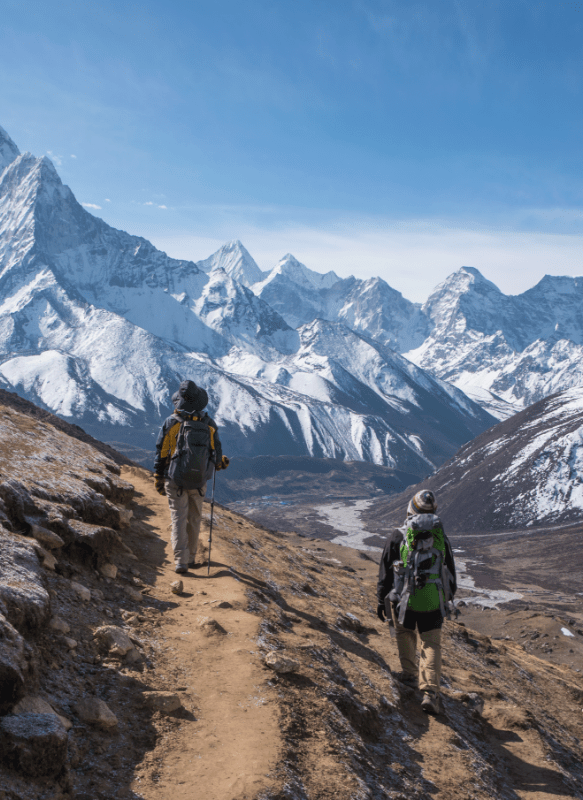 Many tourists’ bucket lists include trekking to The Everest base camp since it is an incredibly unique experience. Here are some of the best activities you may indulge in while trekking to further enrich your experience.

This could be the best possible spot to watch a sunset shift light on the spire of Everest: from the soaring height of Kala Patthar, a ridge that sits due west of Everest and reaches an elevation of 18,510 feet. Hugging the base of the giant peak is Gorakshep, a small village that lies at 16,865 feet. After scoping out Khumbu Glacier, hikers can continue uphill to the settlement of Gorakshep, followed by the Kala Patthar climb.

In total, the round-trip excursion from Gorakshep to Kala Patthar (which means black rock in Nepali) is two miles with an elevation gain/loss of 1,645 feet—it’s steep. From the perch, travelers can see the brilliant cluster of tents at Everest Base Camp, as well as a panorama of Lhotse, Changtse, and Nuptse peaks.

Constructed 350 years ago, Pangboche is the oldest monastery in the Everest region. Adorned in bright red paint, the Gompa (religious building) stands out among the terraces, which cradle the traditional light-toned homes and fields of its namesake village. The community gazes up at the immense, bright-white faces of the Himalayas.

After hikers leave the rhododendron forest and village of Phortse, they gradually make a 400-foot ascent to Pangboche. Overseen by a single monk, the ancient monastery is also the last permanent settlement located at the altitude of 12,795 feet along the trek to Mount Everest.

More than 40 years ago, the Himalayan Rescue Association of Nepal was established to help support the health and safety of climbers, trekkers, and locals in the remote reaches of the Himalayas. The first-ever aid post was launched in the village of Pheriche, at 14,600 feet in elevation. Pheriche’s clinic still thrives today and is recognized as the highest-elevation health facility in the world.

When you arrive in Pheriche, ask your teahouse host or the aid-post volunteers about the clinic’s daily presentations on altitude sickness and other travel-related illnesses. The talks are usually free to the public, interesting and informative and offer real-time data. Plus, you’ll get to meet other trekkers from around the globe.

The Gokyo Lakes are considered sacred to both Hindus and Buddhists. The centrepiece in a grouping of six lakes, Gokyo Lake is held in a magnificent crease between Gokyo Peak (also called, Gokyo Ri) and its life source: Ngozumpa Glacier, a 12.4-mile ice block and the longest glacier in Nepal.

A handful of hotels (around $14-$30 US per night) sit on the lateral moraine wall, which looks like a sharp spine that creates a border between Gokyo Lake and Ngozumpa. Alpine tundra with juniper shrubs and rhododendrons leads to the silty-clay water, which appears intensely teal against the quartz- and gneiss-speckled basin. Located at 15,583 feet in elevation, Gokyo Lake and its surrounding chain of pools are believed to be the highest collection of freshwater lakes in the world.

The first portion of the hike to reach Gokyo Lakes follows the same route for trekking to the Everest Base Camp. This means hikers can add a visit to Gokyo Lakes to their approach to Everest Base Camp, or their return. After reaching these Himalayan pearls, hikers can opt to ascend Gokyo Peak, which stands 17,575 feet above sea level and offers an earth-shattering glimpse of four of the six highest mountains in the world: Everest, Lhotse, Makalu, and Cho Oyu.

In the village of Pheriche, trekkers can opt for a fulfilling push-up to Nangkar Tshang Peak (also known as Nangkartshang Peak), a viewpoint that nears 16,700 feet above sea level. The hike is one of the most stunning experiences of the Everest Base Camp trek. Following a 2,100-foot climb, trekkers pass cliffside sacred sites to reach the sub-peak and are rewarded with a show of Lhotse, Makalu, and Cho Oyu: three of the six highest peaks in the world. Between two nights in Pheriche, trekkers often weave this hike into their acclimatisation day

How to Prepare for Everest Base Camp trek