The 2017 An Post Rás  is just about to get under way this weekend and includes two of the most difficult ascents in the country in the Mamore Gap and Glengesh Pass when it returns to Donegal for the first time in five years.
The riders have trained very very hard clocking up road mile after road mile over those dreaded bleek winter days in donegal, battling the rain winds and hills have all lead to this weekend and the highlight in the cycling racing calendar, is now time turn turn all that hard work into reality, This year sees a welcomed return of a Donegal team – Voodoo Performance made up of 5 riders & 5 support crew from the four corners of the country. Local Letterkenny cc rider Sean Mc Fadden will partner up with Dermott Turlock – Colm Sheahan – Eamon Hartnett & Conn Dunphy. Local Foumasters cc member Jason Mc Hugh will lead the crusade as Team Manager over the grueling 7days. Supporting the team also will be donegal natives, Alan Mailey & Ciaran o Donnell (support crew) – Jordan mc Ginley (mechanic) – Shaun Mc Bride (physio) & Voodoo Performance owner Jason Black.

Jason Black 3 times Ras rider himself stated, it was exciting to have a Donegal team back in the the An Post Ras, its pinnacle of Irish road racing & its vital life line that we have a team participating for young riders to set the standard and ride the greatest road race on Irish soil. This years test is going to be incredible & special as it takes on the toughest roads entering the 4 days in donegal. As a young cyclist its the “Dream of Dreams” to ride shoulder to shoulder as a Man of the Ras. Its steeped in so much cycling history and helped produce some of the worlds leading professional athletes onto the worlds professional stage, no other than former local Fourmaster cc rider and now Team Sky Professional rider Philip Deignan.
The logistics & costs involved in a 7day stage is huge its not possible with out huge support and sponsors, Having Renault Ireland & local dealership Highland motors continuing to support the voodoo performance brand, it certainly helped make this years Ras entry a reality. Also the huge volunteer input by the supporting crew family members and friends in cycling thats helped in anyway, a huge thank you.

(Above) The Ras stage starting at the Market square on the main street of letterkenny in 1950.

The 65th edition of the race will travel clockwise around Ireland, with stage finishes in Longford, Newport, Bundoran, Buncrana, Dungloe, Donegal town and Ardee before the customary finale in Skerries.

Starting at Dublin Castle for the second consecutive year, the race will total just under 1,200 kilometres and will act as a platform for climbers, sprinters and attacking riders to battle it out for the coveted Rás yellow jersey.

As ever, the race will see Ireland’s finest amateur riders compete against top professional teams and seasoned internationals from around the world in an eight-day spectacle from May 21-28.

An Post Rás 2017 race director Tony Campbell believes that the race will be a test to every style of rider.

He said, “Overall, the race is hillier than it has been in these past couple of years but you can expect that when it is in Donegal. I think that it will be very fast in the first three days and I think the Irish boys will be well prepared for the speed. After that, it is in the lap of the gods for the climbing.”

While recognising that the uphill climbs will be decisive, Campbell also anticipates that fast, aggressive racing should also play a big part in determining the final winner.

“I always say you can design all the circuits you want but it is up to the riders to race it. They make the race really and there are some top quality domestic riders out there.

The An Post Ras Takes place from may 21st – may 28th as sporting enthusiast family and friends come out to roar on our own MEN OF THE RAS 2017. 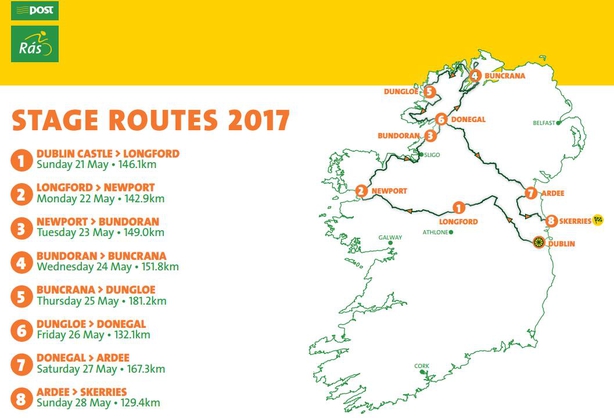 Jason spends a great deal of his time sharing his experiences, inspiring communities to believe in themselves, strengthening self-worth and finding real purpose in life.

PrevPreviousOff shore inspiration
Next4 years today “I reached to top of the world”Next
We use cookies on our website to give you the most relevant experience by remembering your preferences and repeat visits. By clicking “Accept All”, you consent to the use of ALL the cookies. However, you may visit "Cookie Settings" to provide a controlled consent.
Cookie SettingsAccept All
Manage consent

This website uses cookies to improve your experience while you navigate through the website. Out of these, the cookies that are categorized as necessary are stored on your browser as they are essential for the working of basic functionalities of the website. We also use third-party cookies that help us analyze and understand how you use this website. These cookies will be stored in your browser only with your consent. You also have the option to opt-out of these cookies. But opting out of some of these cookies may affect your browsing experience.
Necessary Always Enabled
Necessary cookies are absolutely essential for the website to function properly. These cookies ensure basic functionalities and security features of the website, anonymously.
Functional
Functional cookies help to perform certain functionalities like sharing the content of the website on social media platforms, collect feedbacks, and other third-party features.
Performance
Performance cookies are used to understand and analyze the key performance indexes of the website which helps in delivering a better user experience for the visitors.
Analytics
Analytical cookies are used to understand how visitors interact with the website. These cookies help provide information on metrics the number of visitors, bounce rate, traffic source, etc.
Advertisement
Advertisement cookies are used to provide visitors with relevant ads and marketing campaigns. These cookies track visitors across websites and collect information to provide customized ads.
Others
Other uncategorized cookies are those that are being analyzed and have not been classified into a category as yet.
SAVE & ACCEPT