In The Press – DONEGAL NEWS 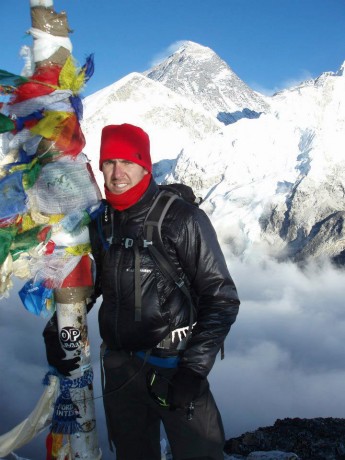 A POPULAR Letterkenny businessman will tomorrow (Saturday) commence his attempt to become the first Donegal person ever to summit the world’s highest and most dangerous mountain – Mount Everest.

Mr Jason Black (42), who runs Voodoo nightclub along with his wife Sharon, hopes to plant the Donegal flag on the North East ridge of Everest (29.028ft) some time within the next 50 days.

If successful, he will become only the 38th Irish person to conquer Everest.

Speaking to the Donegal News from Kathmandu, Nepal, yesterday, Mr Black said he is on the verge of putting a lifetime of training into practice.

“I am standing here in Kathmandu on my 42nd birthday, looking up at the top of Mount Everest and trying to picture myself there with my Donegal flag – I could not be happier, this has been a long time coming,” he said.

Mr Black has been a keen mountaineer from a very young age through the 1st Letterkenny Cubs and Scout troop, an introduction he firmly believes has fuelled his love for the great outdoors.

Coupled with a meeting 20 years ago with the first Irish man to summit Everest, Dawson Stelfox, Jason was bowled over with the energy, the inspiration and the sense of adventure of the highest place in the world.

He will attempt to solo the North Ridge with his climbing sherpa, Nima Gombu. Their route begins from the north side of Everest in Tibet.

You can follow Jason’s progress on his blog, www.voodooascent.com

To read this full story visit your local newsagent and pick up your copy of this Friday’s Donegal News.

For as little as €1.40 per week you can view the current edition of the Donegal News online – click here for further details

Jason spends a great deal of his time sharing his experiences, inspiring communities to believe in themselves, strengthening self-worth and finding real purpose in life.

PrevPreviousNailing a winter summit, Mt Aneto
NextIts my Birthday…be rude not to.Next
We use cookies on our website to give you the most relevant experience by remembering your preferences and repeat visits. By clicking “Accept All”, you consent to the use of ALL the cookies. However, you may visit "Cookie Settings" to provide a controlled consent.
Cookie SettingsAccept All
Manage consent

This website uses cookies to improve your experience while you navigate through the website. Out of these, the cookies that are categorized as necessary are stored on your browser as they are essential for the working of basic functionalities of the website. We also use third-party cookies that help us analyze and understand how you use this website. These cookies will be stored in your browser only with your consent. You also have the option to opt-out of these cookies. But opting out of some of these cookies may affect your browsing experience.
Necessary Always Enabled
Necessary cookies are absolutely essential for the website to function properly. These cookies ensure basic functionalities and security features of the website, anonymously.
Functional
Functional cookies help to perform certain functionalities like sharing the content of the website on social media platforms, collect feedbacks, and other third-party features.
Performance
Performance cookies are used to understand and analyze the key performance indexes of the website which helps in delivering a better user experience for the visitors.
Analytics
Analytical cookies are used to understand how visitors interact with the website. These cookies help provide information on metrics the number of visitors, bounce rate, traffic source, etc.
Advertisement
Advertisement cookies are used to provide visitors with relevant ads and marketing campaigns. These cookies track visitors across websites and collect information to provide customized ads.
Others
Other uncategorized cookies are those that are being analyzed and have not been classified into a category as yet.
SAVE & ACCEPT