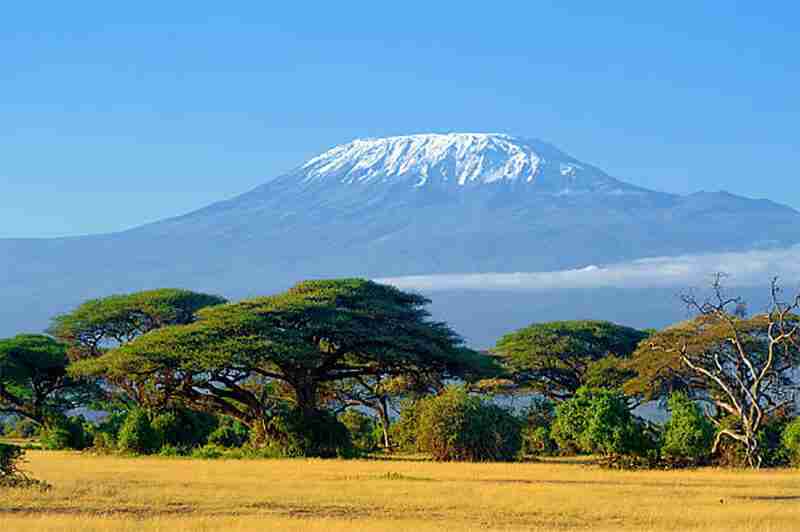 Summiting Mount Kilimanjaro is a bucket list climb for a reason⁠. The mountain’s 19,341-foot Uhuru Peak is not only the highest point in Africa, making it one of the world’s Seven Summits, it’s also the tallest freestanding mountain in the world. Towering over the bushlands of Kenya and Tanzania, Kilimanjaro is accessible from both countries and sees some 40,000 climbers each year. But despite its popularity, it’s no walk in the park.

Most of the time, climbing Mount Kilimanjaro is not tough because the routes are not steep; instead, the difficulty comes from adjusting to the altitude. However, the summit night is incredibly challenging because it is the coldest and windiest part of your journey.

Expect to spend at least a few months leading up to your adventure walking or running hills, biking long distances on high resistance, or climbing stairs to condition your body for the trek. It’s also a good idea to ask your doctor about any medications that may ease altitude acclimatisation on the mountain, fending off symptoms like nausea and headaches.

You’ll also need to book a guide: Climbing Mount Kilimanjaro solo is prohibited by Tanzanian law, and altitude sickness and extreme weather makes a guide essential. You can book a private trip, but group travel is the easiest and most affordable option. Sizes range from four to 12.

Look for operators that cater all meals on the mountain and offer porters to carry your overnight bag. Though quick ascents are offered for climbers comfortable in higher altitudes, longer climbs with built-in acclimatisation days are best for a range of hikers, from novice to intermediate. For shorter routes, expect to pay around €3,000 for a full package, while longer climbs can cost up to €4,000.

While there are a number of more obscure and technical routes to the top, if you’re a casual mountaineer, hiker, or traveler, there are three main routes to the top. Here’s a breakdown so you can find the one that’s the best fit for you.

One of the Marangu route’s A-frame huts.

The only option with accommodations along the way, the Marangu route isn’t just the most comfortable way to reach Uhuru Peak, it’s also the shortest. For six days, climbers will trek through a bamboo rainforest and alpine heather and stay in picturesque A-frame huts with incredible views of the national park. But that doesn’t mean it’s easy.

The route is best for those who want a quicker trip but have more experience in high-altitude zones. Departing Kibo hut at midnight, hikers usually summit in time for the sunrise to bathe Uhuru Peak’s snowy saddle in golden light.

A pink, white and blue sunrise over Kilimanjaro’s Rongai route.

Rongai is the only path that approaches Mount Kilimanjaro from the north. Beginning close to the Kenyan border, this is seven-day climb is regarded as a quieter, wilder way to the peak. Eventually merging with the Marangu route at the Kibo hut, Rongai has a more gradual slope than the other routes, meaning it’s better for climbers with less backpacking experience.

Since the hikers also depart the Kibo hut at midnight, they’ll reach the peak in time for sunrise just like those on the Marangu route.

Kilimanjaro’s Lemosho route is one of its most beautiful.

The Lemosho is one of the newest and least traveled paths to the summit. It’s also one of the longest and most beautiful. In the eight days it takes to reach the peak, trekkers pass through lush rain forest then weave through juniper and pine trees to the Shira Plateau (Kilimanjaro’s third peak before it collapsed), the gateway to the 300-foot Lava Tower, a picturesque volcanic rock formation and one of the highlights of the route.

After traversing Shira Plateau and the Southern Circuit, a midnight wakeup call at the Kosovo basecamp precedes the final, seven-hour push to the top.

How much it costs to climb Mount Elbrus