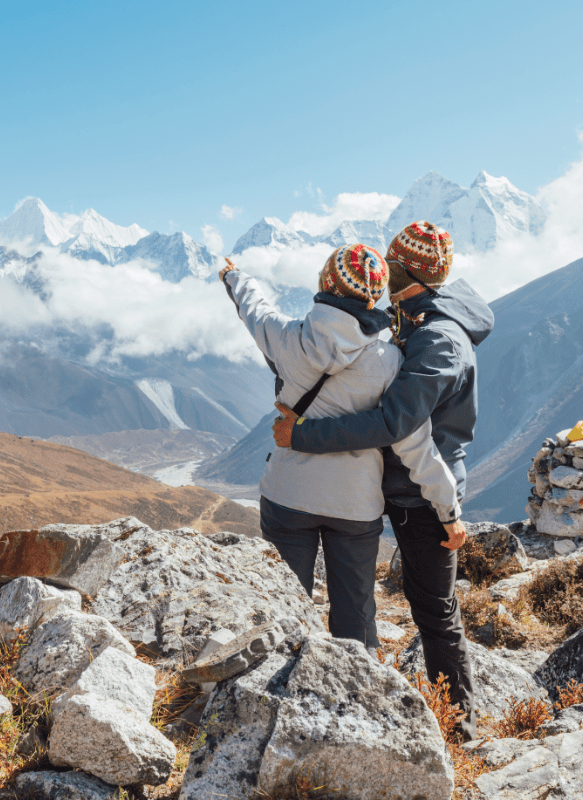 The best time of year to trek in the Himalayas of Nepal is March through May, and again in the fall, from September to November. In the spring (March and April), the rhododendrons bloom along the trails. After the spring season, the monsoon season picks up, and you can expect daily rain from June through September.

As a whole, October is the month with the largest number of trekkers in Nepal, followed by April and March. The highest visitation of international travellers to Sagarmatha National Park is also in October and November, followed by April, May and March.

The foremost climb period for summiting Mount Everest is April and May. So, if you’re excited to have the chance to meet mountaineers and observe the vibrant tent capital at the base of Everest, spring is the prime opportunity.

By October, there is less chance of mud on the trails following the summer monsoons. Plus, the air is particularly transparent with fewer clouds and heat haze, which means the outline of the surrounding peaks are even sharper. However, there’s always a chance of weather in the mountains and at high altitude: Snow can potentially dust the ground at any time of year, so be prepared for cold temperatures, no matter the season.

If you choose to travel solo and decline to have a tour operator manage your entrance tickets and permits, make sure to reserve your own. Current regulations (which are subject to change) is that Sagarmatha National Park requires an entry fee (3,000 Nepalese rupees, which is about €23), that can be paid at the Tourist Service Center located at Bhrikutimandap, Kathmandu.

Note: Bring extra rupees for any additional tax that could be included.

Trekkers also need to attain a Trekkers’ Information Management Systems (TIMS) Card (1,000 Nepalese Rupees per person in a group; 2,000 Nepalese Rupees for solo hikers; at print, 1,000 Nepalese Rupees is equal to $8.87 US), which can be picked up at the same Tourist Service Center. The TIMS counter office hours are from 10am to 5pm, seven days a week. The counter remains open on Saturdays and public holidays, too.

Travellers often plan to spend at least one day in Kathmandu prior to the day they fly to Lukla, so there’s time to square away these two permits before starting the trek. If you want to explore extra trails or peaks during your Everest Base Camp trek, be sure to confirm with the Tourist Service Center if you need to purchase additional permits for public land-use access, such as the Gaurishankar Conservation Area Permit or the Solukhumbu trekking permit.

The toughest adventure race in the world.

Why Does Everyone Climb Everest in May?

The toughest adventure race in the world.

Why Does Everyone Climb Everest in May?

Facebook-square Instagram Youtube
Menu
Menu
Menu
Menu
Copyright © Jason Black 2022 | dESIGN BY mAMMA mARKETING
We use cookies on our website to give you the most relevant experience by remembering your preferences and repeat visits. By clicking “Accept All”, you consent to the use of ALL the cookies. However, you may visit "Cookie Settings" to provide a controlled consent.
Cookie SettingsAccept All
Manage consent